All Coin Images Copyright © 2022 - Obscure Finds a Mindlock Innovation
All coin's and coin images on this site are or at one time were owned by OFCC.
OFCC collects, researches, and photographs every coin displayed on this site. 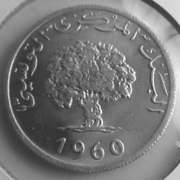 Olive tree on the back of Tunisia coin's.

Olive tree as found on the 1, 2 and 5 Millim coins of Tunisia. The olive tree is a symbol of Tunisian agriculture. The image was made from an image of a coin. [3]

Tunisia is the most important olive-growing country of the southern Mediterranean region; over 30% of its cultivated land is dedicated to olive growing (1.68 million ha). Tunisia’s olive resources are estimated at over 65 million olive trees, grown on 1 680 000 ha, of which 75 000 ha are for certified organic crops. It is a source of employment for 269 000 or 57% of the country’s farmers and accounts for 45% of the agricultural exports, averaging 120 000 t per year. At a world level Tunisia is ranked fourth in terms of the number of olive trees and second in terms of acreage. [1]

Tunisia is one of the world's largest olive oil producers. Olive oil production plays a key role in the Mediterranean country's economy, employing more than 300,000 farmers and providing some sort of income to an estimated one million Tunisians. [2]