Union shield cent - 2010–present
Word Count: 977 - Obscure Finds
If you would to like contact/report an error click HERE and use REF:T87
Rated 65 out of 70 with 1 Verifications


All Coin Images Copyright © 2023 - Obscure Finds a Mindlock Innovation
All coin's and coin images on this site are or at one time were owned by OFCC.
OFCC collects, researches, and photographs every coin displayed on this site. 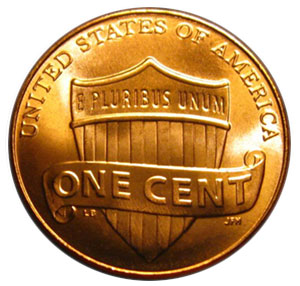 Lyndall Bass (born July 5, 1952) is an American realist painter and teacher who primarily paints still lifes, flower paintings and symbolist figure paintings. She lives and works in Santa Fe, New Mexico. She is the designer of the 2010 penny known as the Union Shield Penny.

Lyndall Bass’ design for the new 2010 Penny has been selected as the winning image in a Federal competition as one of eighteen finalists. Her initials, LB, can be found on the reverse under the left side of the scroll. The intials JFM on the right side belong to Joseph F. Mennna, the staff medalist who sculpted the design. The coin entered circulation in 2010 and will be ongoing each year for at least the next fifty years.

The design is emblematic of President Lincoln’s preservation of the United States of America as a single and united country. The penny features a Civil War era shield with vertical stripes symbolizing the thirteen original states joined in a single compact union. The E Pluribus Unum above them is Latin for “Out of Many One”. The scroll across the shield bears a One Cent curved letter design meant by the artist to stand for the re-establishment of trust in the economic flow of currency after the Civil War. Without the resolve of President Lincoln to win the Civil War, establishing peace and cooperation, we would not be the fifty United States we are today.